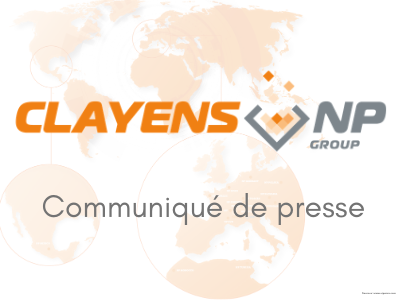 Clayens NP (formerly Sintex NP)—a Siparex investee since October 2019—has entered into exclusive negotiations with PSB Industries concerning the acquisition of its Healthcare & Industry unit with the exception of one site in the United States and one in France. This constructive deal would enable Clayens group to establish solid positions in the healthcare market and round out its geographical coverage with a sizable presence in Mexico.

Clayens NP, founded near Lyon in 1930, is Europe’s leading polymer and composite processor and manufacturer of precision metal components. The group, which has control over most of its materials and manufacturing processes, has built strong positions among major corporations operating in electrical, electronics, aeronautics, automotive, home automation, and other industries covering a wide range of sectors.
The company, headed by Eric Pisani, has a total staff of 2,700 employees based at 17 locations in France, Germany, Hungary, Poland, Slovakia, Tunisia, and Morocco. Most of its business is conducted outside France.
With five industrial sites (France, Poland, and Mexico), PSB group’s Healthcare & Industry unit has a total staff of 700 employees and generates roughly €60 million in sales. Backed by its modern facilities, this unit enjoys solid, longstanding market positions among the leaders in the healthcare sector.
This strategic merger would constitute a major step in Clayens NP’s growth by adding two factories in North America as well as five ISO7 clean rooms as well as further diversifying its target markets thanks to the addition of expertise in the healthcare sector.
This major deal, on which the Siparex teams have made an active contribution, would give the Clayens group consolidated sales on the order of €350 million.
Commenting on the proposed acquisition, Florent Lauzet, Managing Partner in charge of Siparex ETI, said, “The considerable resilience of Clayens NP’s economic model, based largely on sectoral and geographic diversification, has enabled us to pursue consolidation with confidence despite the impact of Covid-19 on the economic situation. The acquisition of PSB’s Healthcare & Industry unit, which operates in highly complementary regions and sectors, would represent a major step in Clayens NP’s growth plans.”

About Siparex ETI
Siparex ETI provides corporate finance services to French midmarket companies. It currently invests via the fund Siparex ETI4, which now has 12 investments in its portfolio, the most recent ones being Topsolid, Valentin Traiteur, Clayens NP, Jacky Perrenot, and Batibig.
Siparex covers all of France as well as Italy (Milan), Germany (Munich), and North America in partnership with the Quebec-based fund Desjardins Capital.
Siparex has over €2 billion in assets under management divided among its Equity, Mezzanine, and Innovation (under the XAnge banner) divisions.