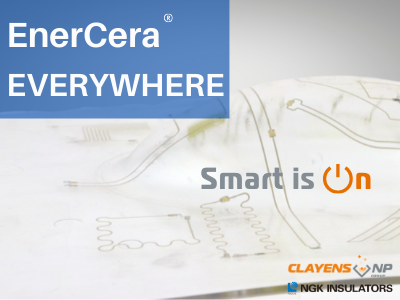 In development of high-performance IME, which contributes to improvement of weight saving and design flexibility of car, there is a problem...

In-Mold Electronics (IME) is the technology in which the functional printed electronics films are molded into 3D shape by thermoforming and injection.

IME is attracting attention in order to replace of traditional structure parts using metal wire harness installed in automobiles and airplanes because it is expected to contribute to weight saving and design flexibility, number of parts, reduction of the lead time of experimental productions compared with conventional way of using rigid circuit board and metal wire harness. The polymer and precise metal component manufacturer Clayens NP in France is also working on the development of the IME.

Types of ECU are limited due to higher electrical resistance of IME.

IME aims to create electric circuits on flexible boards before sealing it with resin by overmolding. Conductive pastes of this electric circuits are simply printed thinly without sintering processing, so its electrical resistance is higher than conventional rigid circuit board using thicker copper (high conductivity). Thus, large current cannot be drown and only a device of low power consumption such as LED illumination, haptics touch sensor can be operated. ECU equipped with drive IC with large power consumption can't be operated.

ECU=Electronic Control Unit. 50 to100 units are placed in a car.

The touch has a physical reaction when touched. Gives a smarter operability compared with the general switch.

Energy storage devices which is applicable in IME isn't found...

To compensate this lower conductivity, it was considered to use so-called dispersed power source, which is an energy storage device is installed near ECU, instead of supplying power to each ECU from a car battery via IME for a long distance.

1.  ECU which can be driven by IME is limited because of its high electrical resistance

2.  An energy storage device which can endure the high temperatures and pressures applied during the overmolding process is necessary for dispersed power source IME.

3.  A long lifetime is also mandatory because it becomes almost impossible to replace energy storage device after molding

The things which can be abled when EnerCera is introduced

A possibility of sophisticated functions of IME is spread by discovery of low-resistance, high heat resistance and long-life lithium ion rechargeable battery!

1.  EnerCera Coin can be charged even by a tiny power through IME circuit, and can deliver enough power to drive ECU with high power consumption such as wireless communication IC, etc.

2.  EnerCera Coin can endure the process temperature of IME, reaching about 300 ℃.

During a meeting between Clayens NP IME team and marketing representative for NGK’s EnerCera battery, NGK explained that EnerCera can be charged via the small electric power which flows through IME circuit. As a matter of fact, EnerCera has low internal resistance, and discharge large current enough to drive high power consumption IC like wireless communication etc. It was also explained that there is a possibility that EnerCera can endure IME process because EnerCera can sustain 300 ℃ during a short time. In conjunction with the ongoing projects, the Clayens NP team felt a lot of potential combination of IME and EnerCera.

Clayens NP and NGK Insulators signed a partnership contract and they began to research to realize highly functional IME.

NGK Insulators (NGK) is a leading company in the field of ceramics. Since its foundation in 1919, NGK has used its unique ceramic technology to provide numerous ground-breaking products that solve social issues. Today, NGK is active in more than 20 countries worldwide, with business foci including mobility, energy, IT and industry.

As one of the largest manufacturers of ceramic substrates for automotive catalytic converters, NGK is actively reducing the strain on our global environment. Furthermore, NGK’s products include the energy storage system “NAS” battery, in addition to the compact, thin and high-energy-density lithium-ion rechargeable “EnerCera” battery line, vital tools for sustainable energy infrastructure.